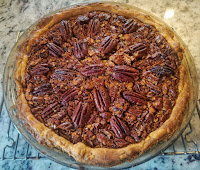 For years I avoided pecan pie because I always found them to be way too sweet for my taste. Then, a company where I worked started catering lunches for clients participating in our week-long computer training classes. Our favorite day of the week was the day they brought lunch in from the Goode Company Barbeque located in Houston, Texas. Our clients raved about the Pecan Pie every single time. So, I decided it was time for me to give it another try. Wow, what a delight. In fact, Goode Company Restaurants ship their Pecan Pies all over the States in their famous wooden box. They have been voted the best mail-order pie in America by Bloomberg.
I stumbled upon a copycat recipe for this pie on the internet but it called for white Karo syrup. This is an imported product in Costa Rica, and consequently, it’s not what one would call economical. So I started researching the history of Pecan Pies. Legend has it the French invented this pie when the native American tribes first introduced them to the sweet pecan nut in Louisiana, long before corn syrup was even invented. Back when the pie was first invented the original recipes called for sugarcane syrup or molasses.
Talk about serendipity, I live in a sugarcane country and we have sugarcane syrup and molasses in abundance. In Costa Rica, I make my own sugarcane syrup from a raw sugar cake called a "tapa de dulce". In other Latin American countries, a raw sugar cake is called a "panela". I boil down the "tapa de dulce" with water until it turns into a thick syrup, similar to corn or maple syrups.
I modified the original recipe for the Goode Company's Pecan Pie to step back in time and return to its roots, using the original sweetener. This was a huge success for our Thanksgiving dessert. 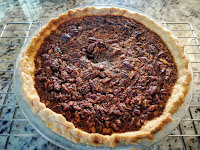