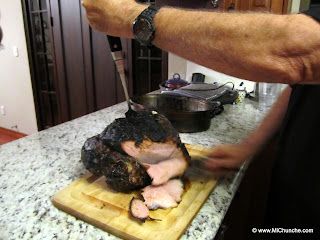 This week we tried something we'd never done before, we brined a fresh ham and cooked it outdoors, in our wood fired stone oven. All I can say is wow! It has been almost 2 years since we've enjoyed a whole ham, and this was a real treat. 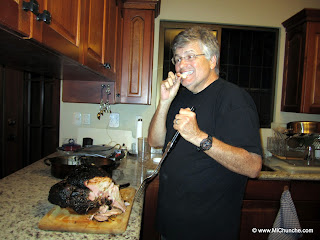 Back in December we split the cost of a freshly butchered pig with a friend and have enjoyed some small pieces on the grill, but we've really wanted to make some sausage and ham. After a little research, we came up with the perfect recipe for the ham. We started to brine the pork on a Thursday morning and the following Monday morning we fired up our stone oven and prepared the ham for roasting. Let me just say, "John is an awesome chef!!

Directions:
To brine the pork:
Combine all of the ingredients in a large container. Submerse the ham in the brine and let it soak for 3-4 days in the refrigerator. Weight the ham down with a plate and bricks so that it is totally submerged in the brine. (This is a plan-ahead meal, but worth it!)

To cook the pork in wood fired stone oven:
We cooked the ham outdoors in our wood fired stone oven. We brought the temperature up to 500°F and let the oven soak up the high heat for about an hour. Then the oven heat gradually drops to the perfect roasting temperature for the duration of the cook time. If the oven cools below 300°F, you can always add a little fuel (lit wood or coals) to bring the temperature back up to around 350°F. Follow the instructions below for basting and glazing. After following the instructions for the first hour, we found the potatoes nicely roasted, so we removed them prior to adding the chicken stock. We then covered the ham loosely with aluminum foil and returned it to the oven (now at about 375°F) to finish cooking. When the ham’s internal temperature reaches 150°F to 160° F. deep inside, near the bone, its done. A 15+ ham could take up to 5½ to 6 hours.


To cook the pork in conventional oven:
Preheat the oven to 450 degrees F.
Remove the ham from the brine, pat dry and make slices in the skin to create a diagonal cross-hatch pattern.

To make the paste:
In a food processor, combine the rosemary, cilantro, oregano, garlic, crushed red pepper, salt, to taste, and about 1/2 cup of olive oil. Massage this mixture generously all over the outside of the ham.

Put the potatoes in a roasting pan large enough to accommodate the potatoes and the ham. If the ham hock is exposed, you may want to wrap it in aluminum foil so it doesn’t cook faster than the rest of the meat. Toss the potatoes generously with some olive oil and salt. Nestle the ham on top of the potatoes and place the roaster in the preheated oven. Check the pork in about 30 minutes, and you should find the skin is starting the get brown and crispy. Remove the ham from the oven and rotate it so you can baste the other side with any leftover herb/olive oil paste and rearrange the potatoes so they don't burn. Nestle the pork back onto the potatoes and return to the oven. Roast for another 30 minutes.

Remove the ham from the oven after the first hour. Check the potatoes to see if they are getting a little crispy, rearrange them and add the chicken stock to the bottom of the pan to keep things really moist and juicy. Reduce the heat in the oven to 350°F and roast for another 2 to 3 hours. When the potatoes are done, go ahead and remove them to serve when the ham is finished

To make the glaze:
While the ham is cooking, combine the Dijon mustard, whole-grain mustard, mustard seen and honey in a small bowl. When the meat’s internal temperature reaches 125°F, remove the ham from the oven and brush it, generously, with the honey mustard mixture. Return the ham to the oven and roast it for about 30 minutes. Flip it over and brush again with the honey mustard mixture (really slather it on the pork). Roast until it reaches an internal temperature of 150°-160°F on an instant-read thermometer.

Remove the ham from the oven, to a cutting board, tent it with aluminum foil and let it rest for at least 20 to 30 minutes before slicing.

Carve that puppy across the grain, and arrange the slices on a serving platter. Re-warm (if necessary) the potatoes and transfer them to a serving bowl to serve with the ham

Many thanks go to Anne Burrell of the FoodNetwork for the inspiration behind this fabulous recipe.
Posted by Pat